El artículo/crónica  «How a small computer chip company, owned by the author’s mother, became the target of a sprawling pan-Asian crime ring that operated throughout Silicon Valley», de Natalie So para Believer, aquí.

«When Aristocrat Inc. was robbed, I was four years old and just starting preschool. I have very few recollections of that time, except of things that were told to me later. Even so, the robbery remained a strange, vague aberration in my memory that did not square with my otherwise undramatic, comfortable, and privileged childhood. It was an incident that was referenced and alluded to by my family every so often, but rarely discussed in detail. When I began working in Silicon Valley myself, after college, at the age of twenty-one—the same age as my mother when she started at Delta Lu—the memory of the robbery came to the fore, contrasting sharply with the shiny, manicured world I had plunged into.

By the fall of 2012, nearly all traces of the Silicon Valley my mom knew had vanished. After moving back to the Bay from the East Coast, I began working for a start-up that bought and sold personal data, a concept I didn’t fully understand when I signed my contract but then later discovered was actually quite morally dubious. The tech industry I found myself in trafficked increasingly in the intangible. Earlier that year, Facebook had gone public; WordPress started accepting Bitcoin in November; and I took my first Lyft ride. Hired as a marketing and PR associate, I scrambled to make Twitter, Facebook, and LinkedIn pages for the company to help fluff up the brand’s online presence. Around that time, social media had begun to mean something.

The company I worked for tried hard to be a semaphore for a cool new start-up, and as such, the work environment read like a parody. The founders—two brothers from rural Illinois—were avid Burners who participated in a ceremonial, psychedelics-fueled gathering every New Year’s Day to set their “intentions” for the year and were buying up millions of dollars worth of land in New Zealand. On Monday mornings, the company-wide meeting began with a “minute of mindfulness,” which was often followed by a startling if well-intentioned rap by the younger brother, which he called his “flowetry.” It was cute, but also not. In the morning before work, I’d take a train down the Peninsula to swim laps at a company-subsidized gym, after which I’d walk across the street and eat breakfast in the office kitchen. Occasionally I’d take a nap or do yoga in the Zen Room—activities that were encouraged by the company’s “happiness engineer.” The entire experience felt at once frictionless and empty, like bad contemporary art. It was a world apart from the Silicon Valley I had heard about from my mother.

The Silicon Valley in which my mother got her start was volatile, high-stakes, and frenzied. For her, there was no goal of an IPO, no fantasies about artificial intelligence or life extension—there was only survival. Hardware reigned supreme, and the technological infrastructure that today supports our one-click consumption was still in its infancy. (Amazon got its start in 1994. Craigslist surfaced on the internet in 1995. Larry and Sergey conceived of a student project in 1996 that would eventually culminate in a start-up called Google in 1998.) Companies like Aristocrat Inc. would eventually disappear as the internet became a more robust marketplace, diminishing the necessity for a gray market, and making fluid direct-to-consumer sales. But when my mother started her business, the marketplace was decentralized, and demand often outpaced supply. Frequent shortages meant that companies could not find the parts they were looking for through regular distribution channels, so they searched for components like motherboards, memory chips, and hard drives on the gray market. As a result, hundreds of small companies formed, acting as brokers or speculators. Aristocrat Inc. was one of those companies.»

or a slogan may topple you

(trees are their roots

and wind is wind)

if the seas catch fire

(and live by love

though the stars walk backward)

but welcome the future

(and dance your death

away at this wedding)

with its villains or heroes

and tomorrow and the earth) 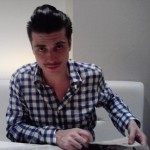